on December 14, 2014
Born in Sofia, Bulgaria, Alexandra Zerner is a solo artist, guitar player, multi-instrumentalist and composer. She has been working as a session musician, sound engineer and guitar teacher since 2001.
In 2013 she participated as a guest musician to the We All Die (Laughing)’s first album “Thoughtscanning”. In January 2014 she started her solo career as a guitarist, working on her debut solo album “9 Stories”, which is released on November 19th, 2014.
In the beginning of the year she was invited by Déhà Amsg to be a part of the Post-Rock/Ambient project “Aurora Borealis”, where they together made the album “The Path To Atlas”, which is about to be released in 2015.
Since September 2014, she becomes a part of the worldwide “Another Destiny Project” as a lead guitarist. In October, 2014 Alexandra Zerner is already in the “Top 15 Hard Rock & Metal Female Guitar Shredders” chart by Metalholic.com.
The latest release is entitled  9 Stories, features nine themed/conceptual pieces that enable Alexandra Zerner to display pretty impressive compositional, production and performance capabilities.   Alexandra Zerner is a multi-instrumentalist and the tunes benefit from the full use of Alexandra tonal pallet, including guitar piano and organ which adds significantly to quality of the album. In the solo work, you can hear Alexandra's influences, a nod to Petrucci a wink to Friedman (Memoirs Of A Geisha and The Sorrows Of Young Werther) and Yngwie/Becker overtones (Girl With A Pearl Earring) . The guitar tone is full on and metallic, plenty of over driven grunt, but not too bright in tone, which adds to over all sound balance for the album for me.
Alexandra has created exquisite classical acoustic pieces like Lolita, subtle classical piano driven pieces like Light Breathing and then more hard hitting progressive rock/metal tracks like Léon or For Esmé - With Love And Squalor and the more unusually titled  A Perfect Day for Bananafish.
The whole album is well recorded and produced, with intelligent compositions which are well balanced and well thought through. I am pleased to say there is a significant amount of high quality guitar playing through out which will tick the box of any guitar fan and the conceptual nature of the album should put it on the shopping list of fans progressive music.
1 A Perfect Day for Bananafish 7:53
2 Léon 5:22
3 Lolita 4:43
4 Memoirs of a Geisha6:36
5 Light Breathing 2:53
6 For Esmé - With Love and Squalor 5:41
7 Girl with a Pearl Earring 6:03
8 The Seducer's Diary 5:50
9 The Sorrows of Young Werther 2:10 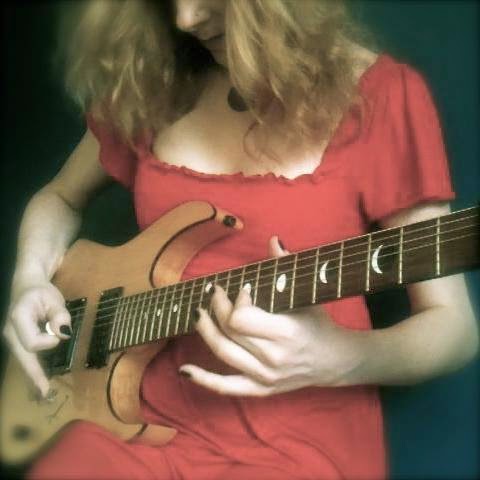 We took some time out to ask Alexandra Zerner in more detail about this release, to find out more about the creative process and Alexandra's tools of the trade.


How long did it take you to record the album?

I started working on the album in the beginning of the year and the actual recording process started around March. It was pretty hard task to perform, because I needed to compose and play all the instruments in the album, which takes time and effort to do properly. There were also few breaks in the process, because all tracks in the album were inspired by books, novels and movies and there were times, when I felt stuck, because I couldn't find the right books or movies to fit the concept of the album.


How did you know when you had finished the album?

The main idea of the album was already clear in January, but it needed some refinements - it had to be a conceptual album, where all the pieces are discrete, but at the same time connected by common lines in their plots, so I couldn't put deadlines, except, that I wanted the album to be released this year, in the autumn, if possible.

One of the tracks in the album - "Light Breathing", I wrote, when I was 15, but rearranged it a little bit for the album. The rest of the tracks were written this year, specifically for the concept of the album.

I had very precise idea of what this album should look like and what the content should be, so it was not that hard to determine when it's finished - when I put all the mastered tracks in the right order, heard the whole album several times, on several different places and devices, it just felt complete.


How do you know when a track is finished?

The writing of about half of the tracks went pretty smoothly and they usually needed only some technical work and polishing, but the rest were hard, some of them were even nightmares, which caused me a lot of sleepless nights and sometimes anger. Some of them were left for months, with missing parts, solos and so forth. Luckily, everyone of them was finished in time, in the best way, according to my ideas, so maybe they just had to be left for a while to ripen.

Finally, when I have a track recorded, I listen to it many times, on different devices and places and make some tiny corrections or re-record some parts and then it suddenly hit me and it just sounds finished.

There was only one unfinished track, which was thrown away - it just got stuck in the middle, also it didn't fit the concept good enough, so it had to be removed.


How do you decide what is going into a track and how do you name it?

Due to the specific approach to this album, every track name was known before the actual piece was written, because it's inspired by a certain story, either book or a movie. So it was like writting soundtrack, which makes the process a little bit more difficult than usual, because I needed to recreate very specific emotions and situations.

When I write a piece, I generally like to predefine the "message" and the emotional content I need to deliver with my music and then I let my mind rove unattended, until some melody pops up. Because my brain is musically trained, the melody usually comes with a harmony, so this is the main frame of the piece. When it is present, the rest is like building a house.

I compose many different riffs and parts, but small amount of them turn into tracks. The rest, in general, are left behind and rarely used in future songwriting.

Alexandra Zerner - For Esmé - With Love And Squalor (intro) - teaser


What equipment did you use in the studio

I have a small home studio, which I am building for the last few years. It contains one very old MacBook Pro, T.C.Electronic Desktop Konnekt 6 sound device, pair of KRK studio monitors, Philips SHP8900 headphones, AKG Perception 200 condenser microphone, M-Audio Keystation Pro 88 midi keyboard, BOSS GT-8 guitar processor, two Ibanez electric guitars - one 6-string RG370 (not used in the album), one 7-string RG7420, one brand new 8-string Jackson JS32-8Q Dinky, which I bough in the middle of the album recording process and decided to use it for two of the tracks, a 5-string Status Shark bass and one acoustic 6-string guitar - Alvarez RD20S.

I don't have amps, which many people find strange, but this is the current situation and I needed to find a way to record, mix and master the album in these conditions.


How did you record the drums for the album?

I played the drums on my midi keyboard, using a drum software.
I record them on two takes - at the first one I play everything, except the cymbals and the second take is only for the cymbals. I do it that way, because I want to get the human feel on the drums as much as possible, which can't be achieved if just clicking notes with the mouse, also my fingers are not enough to cover all the sounds needed at once. Of course, after recording the drum parts, they need some additional work, but basically this is how I do it.


Do you approach an album as though it is you meister work?

I consider this album as a big achievement, because it is my debut album, which comes after many years of practice and preparing and now I just felt ready to do such step and start my solo career as a guitar player. I think it will remain pretty notable in my future works, but I am not the one, who should label it as a masterpiece - this is something that the fans must decide.


When the album is done how do you feel about it?

I am both proud and sick of it, because few of the tracks were written and recorded in the beginning of the year and the rest - few months after, which leads to hearing the old ones so many times, that I got tired of them. But now, when I am listening to my whole album, done and released, I feel happy and relatively satisfied. Relatively, because I know, that this album could have been made better as a sound quality and so forth, but if I waited for the perfect conditions, I guess I would never make it.


Did you have a budget for the album?

I actually spent almost nothing, because I played and recorded all the instruments in my home studio, I mixed and mastered the album, so the only investment was the 8-string guitar, and the fees around releasing the album.

The next time I will probably invest in more and better equipment and will leave the mastering work to someone, who will do it better.

How did you go about your promotion strategy?

I am not yet sure about the promotion strategy, because for now I am my own manager, producer, promoter and anything else, so I need to educate myself good enough to do these jobs now, when the album is released.

I guess soon I will have to find a real manager, because I just have no power to do everything by myself.


How did you decide what the album title and design would be?

The name of the album came spontaneously because of one of the stories, that impressed me enough to push me to write a track about it - it was part of a J.D.Salinger's book, so I decide to make an album, containing 9 tracks, which are inspired by stories, that touched me very deeply and intensely, so that's where the name came from.

The design of the artwork is done by my basic idea, which I drew with a pen on a piece of paper and gave it to a professional designer and she did a great job. I think it is important part of the album itself, because it should show the people what to expect from this album and it tells the background in a single picture. It is like a business card of the product, so it is really important.


What were your musical influences on this album?

I listen to many different genres of music, although I prefer progressive rock - from the old bands like Rush, Yes and Pink Floyd to modern ones like Dream Theater, Periphery, Animals As Leaders. I have my personal guitar heroes, that I learnt a lot from them and they had very serious influences over me as an artist and guitar player - Marty Friedman, Jason Becker, Tony MacAlpine, Yngwie Malmsteen, John Petrucci, Joe Satriani.

I also like classical music and composers like J.S.Bach and Roland De Lassus, which I guess can be heard in my works - they also affected my composing manner to a great degree. 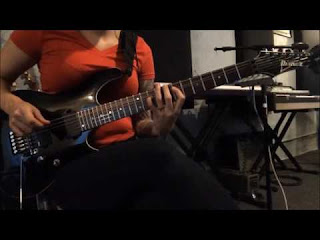 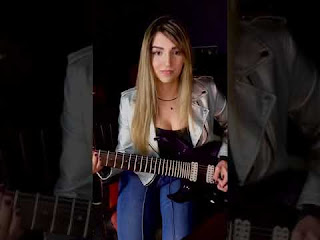 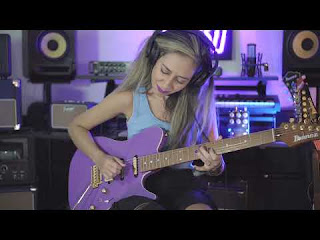