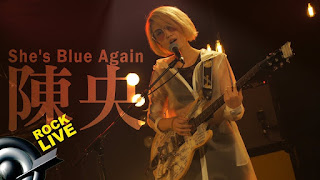 Welcome to the Rolling Stones Live ROCK LIVE YouTube→ https://goo.gl/EpCp31
#RockLiveMusicPower, On Show! Rock-creating female singer-Chen Yang brings the rock star "She's Blue Again"! Chen Yang YM has been writing songs since he was 18 years old. He has accumulated nearly a hundred works and has been involved in Rock/Glass/Funk/Fusion. She graduated from Berklee College of Music in the United States in September 2017. During her school year, she received a school scholarship for her "Central Works", honed her composing theory and composition, and also received Grammy Awards engineer George. Massenburg strong praise. Although she has studied many songwriting and composing theories in her school, she still has the uniqueness and rock soul of the Chinese style. Before attending Berklee, she also received scholarships at the Musicians Institute in the West Bank. There she studied performance techniques and accumulated a lot of performance experience, making her very familiar with the stage environment. After returning to Taiwan, he participated in the "2018 MTV ASIA Aloft Star" creation competition, entered the jury and selected the top 15 in Greater China, and won the second place in the final audience voting project. She also participated in the "Taipei Weekend Music Event" and was also selected by the judges to successfully enter the field. In the short time after graduation, there have been many large-scale TV programs, such as "Variety of the Variety", "K-Star", and the "Star of Hope" in the talent show. The original works have been performed in Taipei's major Live Houses, and they are well received. Chen Yang released the first creation of the EP mini album "She's Blue Again Blue Friday". This album produced by Chen Yang and her orchestra, in addition to making the audience refreshed, is also full of people. This time, Chen Yang came to the site of the Rolling Stones to bring her the latest hit EP "Blue Friday"'s main song "She's Blue Again", let us feel Chen Yang's wild rock and roll women! Singing: Chen Yang Guitar: Lin Huiru Bass: Huang Jianlun Drummer: Wang Shengzhan Brokerage Company: Quasi Music Special thanks: Coca-Cola Coca-Cola

Yang YM The first EP "She's Blue Again Blue Friday" Next, you will experience a contradictory day of the girl, the preface of the note will take you into the blue planet of the depressed girl. This album highlights the contradictory complex of the girl in the "doing and not doing, love and not love", transforming complex emotions into creation, and expressing these delicate emotions through strong performance. Click to listen → https://ymchen.lnk.to/SBA_EP