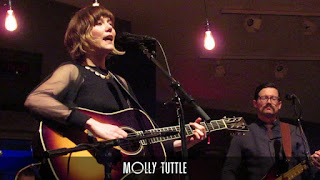 Join us for a special night of live music with the award-winning Nashville-based singer/songwriter Molly Tuttle and the popular traditional Celtic trio The Friel Sisters at the WGBH Studios in Brighton.

Molly Tuttle has broken boundaries and garnered the respect of her peers, all while winning fans over with her incredible flatpicking guitar technique and confessional songwriting. Graced with a clear, true voice and a keen melodic sense, the 25-year-old seems poised for a long and exciting career.

Tuttle’s critically acclaimed EP earned her Instrumentalist of the Year at the 2018 Americana Music Awards, and she has continued to accumulate accolades winning Folk Alliance International’s honor for Song of the Year for “You Didn’t Call My Name,” and taking home her second trophy for the International Bluegrass Music Association’s Guitar Player of the Year -- the first woman in the history of the IBMA to win that honor.

Now Tuttle is evolving her signature sound with boundary-breaking songs on her upcoming debut album When You’re Ready. Produced by Ryan Hewitt (The Avett Brothers, The Lumineers) the project showcases her astonishing range and versatility and shows that she is more than simply an Americana artist.

Joining Molly Tuttle will be The Friel Sisters.

Anna, Sheila and Clare Friel are traditional musicians born in Glasgow with their family roots firmly entrenched in the Donegal Gaeltacht (Derrynamansher). Being siblings, they achieve a close blend on fiddle, flute and uilleann pipes interspersed with songs sang in unison, many from their family and local repertoire.

Since the launch of their debut album, they have performed across the world and have appeared as guests on stage or toured with acts such as Altan, The Chieftains, Lúnasa, Sharon Shannon, The Máirtín O’Connor Trio, Cherish the Ladies, Solas and Fidil. In 2016, the girls performed at Festival Interceltique de Lorient, and won the prestigious Trophée Loïc Raison.

2018 has been a very exciting time for the girls as they released their new album Before the Sun with Hajime Takahashi and Cathal Ó Curráin, produced by Ciarán Ó Maonaigh and recorded by Jack Talty. This was launched to a sold out crowd at Celtic Connections 2018 in Glasgow.

Get your tickets today for what’s promising to be a night filled with virtuosic and lively music in WGBH’s Fraser Performance Studio.
Molly Tuttle "Rain and Snow"