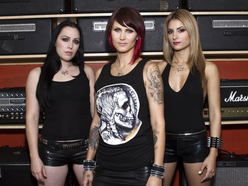 Along with the video, Revolver Magazine has posted an exclusive interview with the band, conducted by music writer, Sirius XM Liquid Metal DJ and video personality Zeena Koda. The interview discusses the band’s west coast beginnings, what it’s like to be a female in the heavy music world, the new music video, and more. Follow this link to read the interview and watch the new music video for ‘New Beginning’.

The tracks ‘New Beginning’ and ‘Quiet Storm’ are available for purchase now via iTunes.

EYE RA HAZE will release their new EP, Eye Of The Storm, on June 11, 2013. The EP was recorded with world-famous producer Chris “Zeuss” Harris (Shadows Fall, Soulfly, Hatebreed) and features three new tracks, ‘New Beginning’, ‘Quiet Storm’ and ‘Warships’, The band is planning a string of live shows in the Northeast this spring and plans to return to the studio in July 2013 to record a full length with hit songwriters Bob Marlette (Saliva, Shinedown) and Jasen Rauch (Korn/Breaking Benjamin).

For more information and to hear more music from EYE RA HAZE please visit these websites:


"Natasha Singer, the bold and sensuous frontwoman of Eye Ra Haze, has lived a traveled existence enriched with deep musical ties that have linked her to a wide variety of worlds. A devoted wife, proud mother ,and active artist, her passion for creating and exploring the deeper aspects of life spills out of her piecing eyes. With a vocal range that has graced a variety of styles from blues to punk rock, her versatility has culminated with the new Eye Ra Haze EP, Eye of the Storm, which is due out on June 11. In Eye Ra Haze, the powerhouse Singer, alongside two other talented women and two talented men, create heartfelt compositions that blend of atmospheric textures, poignantly soulful vocals, and thoughtful keyboard serenades. Nodding to her native culture, Singer thoughtfully named the band Eye Ra Haze and is poised to take the band to the next phase with their new video for the EP’s first single, “New Beginnings” premiering at the bottom of this post." Zeena Koda, Revolver Mag

"One up-and-coming alt-rock band to keep an eye on is Eye Ra Haze, a female-fronted group from New York that combines the eight string guitars and floating atmospherics of Deftones with the melodic cadence of Chevelle. The group are releasing a new EP Eye Of The Storm in the coming weeks, and in preparation, the group are releasing a series of vlogs and guitar playthroughs which will be posted exclusively to Heavy Blog! Today, we bring you the second in the band’s series of vlogs (the first one here) from vocalist Natasha Nicholson and a video playthrough of guitarist Nicole Papastavrou covering Korn‘s classic single ‘Here To Stay’!" ... Heavy Blog Is Heavy

"Today, RevolverMag.com presents an exclusive video from New York band Eye Ra Haze. It’s a trailer for the band’s new album, Eye of the Storm. Several songs and videos — and the album itself — will be released in the coming months. In the meantime, check out the video below and head toeyerahaze.com for more info on the band." ... Damian Fanelli, Revolver Magazine