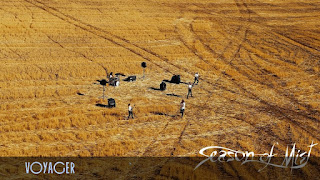 Biography
Destined for longevity and worldwide success, Perth based quintet Voyager recently signed their first worldwide recording contract with Season of Mist following the release of their 6th opus Ghost Mile. Ghost Mile saw dedicated fans contribute to the band’s Pledge Music campaign in 2017, reaching the band’s goal in just a little over a week. Having toured the world a few times over and having shared the stage with names such as Deftones, Leprous, Nightwish, Coheed and Cambria, as well as headlining a number of festivals, Voyager are back with an taste of what’s to come. The band’s versatile sound sees them complement a multiplicity of line-ups, and attract the love and attention of a wide demographic of fans.

From the new-romantic croon of Danny Estrin’s vocals and his 80’s keytar solos, to the technical yet melodic chops of Simone Dow and Scott Kay’s fretwork, to the groove of Alex Canion’s bass and to the bombastic beats of Ash Doodkorte’s frenetic drumming, Voyager are a pop/prog/power/rock/metal force to be reckoned with.

"Whether it's a decade-old powerhouse or a newer entry, every song in Voyager's packed setlist resonates with luscious singalongs, permeating percussion and rock-solid riffs" - Prog Magazine


"Australia's Voyager went on to deliver one of the sets of the day. It was hard to take your eyes off them, particularly guitarist Simone Dow, whose facial gymnastics matched her phenomenal shredding" - Powerplay Magazine

"Voyager are all smiles before pulling out a musical arsenal chock-full of richly textured polyrhythms, expansive grooves and fret-based gymnastics" - Metal Hammer

"Having toured with acts like Deftones in their homeland we see a group who are seriously honed as a live act and with a set of songs that are a noticeable step up from the usual tech-metal crowd. Very promising, very impressive." - Metal Hammer

Video directed and produced by Red Empire Media
Many Thanks to CSIRO, Murchison Widefield Array Collaboration and Curtin University, and The International Centre for Radio Astronomy Research