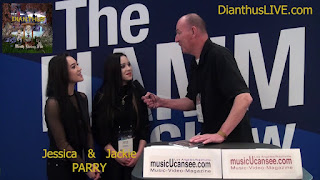 Check these ladies out at https://www.DianthusLIVE.com on-line and chase 'em around on social media ! Jackie and Jessica Parry AKA: Dianthus. You're hearing 'Please Say (You're Pretending) from: Dianthus 'Worth Living For' 2018
Interview: Tino Anglade
Cam/edit: CJ Reagan
For: musicUcansee.com
Below lifted from DianthusLIVE.com:
DIANTHUS is a heavy rock/metal duo based out of Riverside, California. The band was formed by twin sisters, Jackie and Jessica Parry. Their music has intrigued listeners with their chaste, melodic vocal harmonies, increasingly ominous guitar tones, thunderous bass, and full-throttle attack on drums. DIANTHUS evokes a sense of elegance and mystery to their live performance, as well as an acceleration of high-energy on stage. In March of 2016, DIANTHUS was selected to participate in the House of Blues' Music Forward Foundation's "Bringin' Down the House" Showcase at the legendary Wiltern Theatre in Los Angeles, California. The band also released their debut single titled "Within Hazel Eyes" in February of 2017 (produced by Jeremy "JINXX" Ferguson of Black Veil Brides). The band released their debut record, "Worth Living For", (recorded at Matt Sorum's eminent DRAC STUDIOS, also produced by JINXX) on July 17th, 2018.
Visit our website for more! https://dianthuslive.com
Jessica & Jackie - Dianthus - #NAMMShow Interview - musicUcansee.com