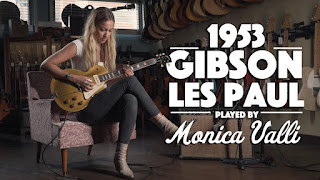 Guitarist, Monica Valli, strums away on a Les Paul Goldtop Classic at the Gibson booth stage during NAMM 2019. Monica is known for her rich tone and soulful guitar playing showcasing her blues influences.


A fantastic example of an early Les Paul! Loaded with a pair of original P-90 pickups, this Les Paul can cover nearly any genre; jazz to blues to some of the most iconic sounds in rock and roll. Thanks to a Glaser Low Profile bridge, the guitar plays far better than most Les Pauls from '53. The original bridge also comes with the guitar.