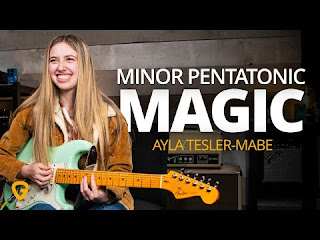 Get the Chord charts & Scale diagrams for this lesson!
►https://bit.ly/2KenDTi

But for a scale that only consists of five notes (‘penta’ meaning five, ‘tonic’ = tone), how can you make the most of it? You add in a little *magic*.

By the end of this lesson, you’ll know the standard pentatonic scale “box”, and how to break out of it by moving up the fretboard. Ayla also demonstrates you how to throw in a little minor pentatonic *magic* by infusing a few additional notes like major thirds & sharp fourths, among others.

The lesson is a great launching point to begin exploring the endless possibilities for improvising on the guitar.

And remember to grab the scale diagrams for this lesson here: https://bit.ly/2KenDTi

***Don’t forget to hit the ‘subscribe’ button & ‘notification bell’ so you can watch the next video as soon as it’s released!***

What’s your favorite scale shape to improvise with?