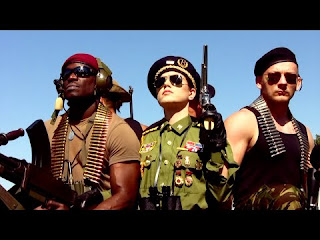 The title song from her 2016 metal album, available on iTunes http://bit.ly/IamTheCommanderInChief & other digital outlets. Her latest acoustic album, Berit - Vol.1, has been hailed as "a masterpiece" by reviewers, available on all major digital outlets, in addition to limited edition, signed CDs on her website: http://www.commandermusic.com. Her 2014 classical crossover album charted at #1 on Amazon.com, available on iTunes http://bit.ly/2GuitarsClassicalCrossover and other digital outlets.
For more information about the most versatile virtuoso of today, go to her official website, www.commandermusic.com.

Hailed as "one of 10 modern guitar gods," by Metal Hammer, UK, in 2012, she smashed her way onto the metal scene, with her very own music style, before her successful transition to classical crossover, in 2013. A viral video of her being the first ever guitarist to play Sarasate's violin masterpiece "Zigeunerweisen Op.20" on guitar, paved the way for the successful album and more viral videos.
A professionally trained opera singer, in old school Bel Canto technique, with skyrocketing high notes and a crystal clear nordic voice, she has captivated fans all over the world, with her hauntingly beautiful songs. "Berit - Vol. 2" is currently being recorded and will be released during the spring of 2020.
She has been a vocal coach and expert judge on Norway's biggest TV show; "Stjernekamp" or "Battle of the Stars" for two seasons, with close to a million viewers per show.
The Commander In Chief is an independent, unsigned artist. You can become one of her Patreons on https://www.patreon.com/thecommanderinchief

I Am The Commander In Chief